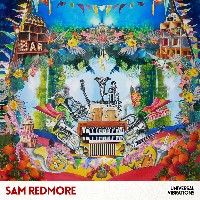 You’ve been reading about the singles here on MB since last September (five of them no less!) covering a range of genres and sub-genres but this month it’s Sam Redmore’s debut long player, Universal Vibrations which has finally dropped. It’s an eleven-track set with a name that implicitly makes the bold claim of being able to rock the party for all and sundry. But having released half his set as singles already can Mr Redmore live up to such a boast? And are there any remaining surprises to be had? Let’s find out, in a review style occasionally used on MB and shamelessly boosted from a man who no longer seems to have a use for it:

1. JUST CAN’T WAIT feat. Lumi HD
A canny move here – start with the pumping disco opener which gets the girls on the floor and it should be all over bar the shouting…

2. ONE MORE TIME feat. Sanity
..as evidenced by this rapped-over, afro-inspired uptempo monster – it’ll be hands in the air, whistles and booty-shaking till dawn.

3. NAGU (Extended Mix)
Yet more evidence (as if it were needed) that Mr Redmore knows his humans with this Radio 6 instro favourite enlisting the power of big drums from the off.

4. ON THE ONE feat. Mr Auden Allen & Renegade Brass Band
Talking of the power of drums, this one celebrates a famous rhythmic discovery by one Mr Brown as well as racial unity.

5. ALEGRE feat. Ellie Coleman
Not that this set is any way flagging, but taking a Latin turn can only raise things up a notch with an energetic banger such as this.

6. PARTY feat. Lumi HD
Ironically it’s the track called ‘Party’ that provides the most downtempo groove yet. It’s not put your feet up time though, for this one’s positively encouraging the bump and smooch…

7. MUSIC IS… feat. MR Auden Allen
…and then it’s briefly back to the Afro-powered uptempo rhythms…

8. ONLY BECAUSE YOU’RE AROUND feat. Andrea Brown
…before the tempo slows and the mood softens for this ethereal strings-accompanied groover.

9. BLOCKBUSTER
But this is a party LP so it’s all about the blockbustin’ combo of Latin grooves and twenty-first century synth FX…

10. TEARS
…before this enor-mous cumbia cover of Giorgio Moroder’s Tears…

11. SO REAL feat. Lumi HD
…and – close with another cover yeah? Slo-mo strings-drenched take on Sylvester’s camp disco hit ought to do it.

BEST TRACKS:
One More Time feat. Sanity, Alegre, Only Because You’re Around, Blockbuster,Tears

(Out now on Jalapeno Records)