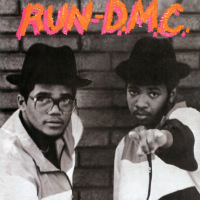 Next up for a deluxe re-issue from Get On Down is one of the most influential hip-hop LPs of all time – Run-D.M.C.‘s Run-D.M.C.. To say that this self-titled debut was a wake up call for hip-hop would be an understatement. Out went the comfortable ‘rhymes over hookless, seven-plus minute disco grooves’ that had pretty much been the model from Sugarhill onwards; in came shorter track-lengths, hooks, rock guitars, the ‘eel hitting a dustbin’ sound of 808 drums and distinctive vocal drop-ins. It was such a great recipe in fact that the Beastie Boys promptly stole it lock, stock and barrel.

The opening trio of tracks is impressive: Hard Times is the meaner cousin of It’s Like That (which also appears and famously got a late 90s house makeover from Jason Nevins) and boasts a similar pulsing proto-hip-house beat, Rock Box totes Val Halen-esque guitar courtesy of session musician Eddie Martinez (who also worked with Whitesnake (gahh!) and Robert Palmer (double gahhh!)) while Jam-Master Jay employs the distinctive minimalism of staccato 808 drums, bells and a bit of scratching by way of a beat. This latter sets the tone for most of the rest of the LP in fact and you’ll pretty much only find a bassline on half of the remaining six tracks. It was a sound that ruled the roost until Eric B & Rakim happened along. When you consider, as well, that the band also committed major services to hip-hop fashion by refusing to adopt the jheri-curled ladies man look favouring instead the street-level tracksuits and Adidas superstar look of the Bronx pioneers – there’s a lot to be thankful to Run DMC for.
(Out 20 January on Get On Down)

Posted on 23rd December 2016 no comments