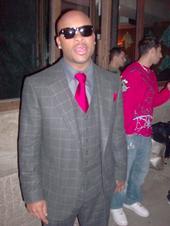 Royce 5’9 and his M.I.C. imprint are teaming up with One Records for the release of Royce’s highly-anticipated forthcoming solo-LP Street Hop, due out in the first quarter of 2009. The album is executively produced by DJ Premier and has generated a major buzz through overwhelming critical praise.

A video for Street Hop’s lead-single, the DJ Premier-produced “Shake This,” will be released later this month. Directed by Rik Cordero (responsible for Nas’ “The N Word”, Snoop Dogg’s “Neva Have 2 Worry” & The Roots “75 Bars”), this video will be the first of two collaborations between Royce and Cordero. “Shake This” will also be accompanied by the Carlos Broady produced B-Side single and video “Part Of Me”.

Street Hop will also feature production from DJ Premier, Nottz, Green Lantern, Carlos Broady, Ski, Kay Gee and Emile, and guest appearances from Bun B, Joe Budden, Joell Ortiz and Crooked I along with a few other surprises that will be unveiled at a later date.

Royce’s mixtapes have built anticipation, becoming a countdown leading up to the day that the actual album is finally available for public consumption. And what the public hears on his wildly-popular mixtapes is just a taste of what Royce has to offer. “This album will definitely show the world why I’m the one to watch right now. I’m happy about my new partnership between M.I.C and One Records, because it’s time to ignite the streets.”

Royce’s unwavering passion for music and hunger for the game keeps him in the studio day and night. This album will be the true beginning of a newly energized Royce, which will start with Street Hop and live through his official forthcoming solo-projects. Knowing that his finest creations are only months away from being heard, Royce exudes a swag of confidence. “I’m ready to show all these other rappers just how wack they really are.”

Royce 5’9 is the newest addition to the upstart One Records imprint, home to the recently released Vast Aire’s latest solo-LP Dueces Wild (2008). Promoting quality over quantity, One Records owner Hanley Halem attests that his motto “One Music, One Record At A Time” is further validated by their alignment with Royce as he laments, “One Records is proud to be in business with Royce. He is an amazing talent and we feel that he has yet to reach his peak as an artist. Street Hop is a breath of fresh air, at a time when the industry really needs it and we are anxiously looking forward to releasing it.”

Royce will be embarking on a tour with D-12 and Joe Budden on November 12th thru the top of 2009, where he will be previewing tracks from Street Hop and new material from his recently released mixtape Bar Exam 2.

Posted on 6th November 2008 no comments