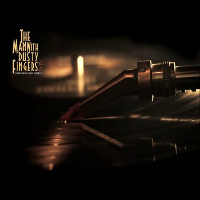 Ok – so perhaps this wasn’t as imminent as it seemed to be all the way back in October last year – not the least of reasons for this being the fact that The Man With Dusty Fingers 2 (Unreleased feats, beats and breaks) now has a release date of this September some – oohh eleven months after rumours of its ‘imminent’ appearance began circulating. But this is the world of a musical genre that’s made an artform out of the delayed release – hip-hop. Well, I say hip-hop – that’s hip-hop of the Roger Molls variety – which is to say in the Wax Tailor/ early Shadow and early RJD2 vein and of similar quality. Lots of instrumentals then, heavy on the atmosphere, and tonnes of crackly old breaks and samples. Crackly and, indeed, dusty – much like Molls’ fingers after he’s been through all those crates. Just as well the video shows the man using Ortofons. If he was rocking the Shures that static cleaning brush would never be away.
(Out 12 September on wax, cd and digital from Bandcamp, iTunes, Rogershop.com)