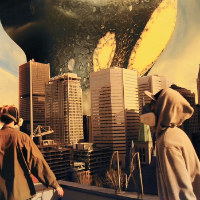 If you’ve been missing the superbly produced vocal and instrumental hip-hop of Roger Molls (last album Metamorphosis Of Muses came out two years ago) you’ll be gratified to hear that the second volume of his The Man With Dusty Fingers mixtape series is imminent. While you wait for that though, why not enjoy the new video to the creepy End Light Tunnel off his last LP. In it, rapper Slik Jack and his mate are at something of a loose end, lurking in an abandoned multi-storey, smoking, skating…throwing cards at hats. There’s light at the end of the tunnel though in the shape of a giant overdone baked potato heading through space to earth. The sudden impact of this titanic piece of space debris in the middle of the city perhaps provides more of a distraction than Jack and co. were looking for however. Ah well, that’s what you get for moping about.