ROCKY MARSIANO: Music For All Seasons (2013) 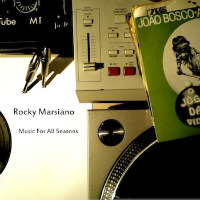 If you dig the sort of stuff that drops on the Wass, Hiperbole and Agogo labels you’re going to love Music For All Seasons. It’s the latest full-length effort from Lisbon-raised, Amsterdam-based producer Rocky Marsiano a.k.a. D-Mars – not to be confused with NY-based former emcee and former Flipmode squad member Roc Marciano – nor even former Stateside boxing heavyweight Rocky Marciano, come to that. Apparently inspired by the longest Dutch winter in a century, Marsiano dug deep into the Brazilian record collection of his Rio-raised mother in a musical effort to summon the sunshine. Sporadic recent torrential downpours notwithstanding, it seems to have worked. This side of the Channel at least.