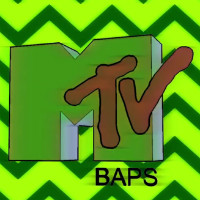 DJ Roast Beatz delivers a homage to Yo! MTV Raps with a masterly pastiche of the defunct but legendary 80s and 90s show that doubles as the new video to the Dr Syntax-featuring Boom Box off RB’s Luxury Boom Bap LP which was released earlier this year. A pastiche of Yo! MTV Raps? Does this mean impressions of presenter Fab 5 Freddy, lots of ladies shaking booty and enough cartoon day-glo visuals to have you reaching for your shades? Well I did say ‘pastiche’ not ‘re-creation’. Thus we get presenter ‘Rob Dick’ (Roast Beatz himself, displaying parodic thespian talent as a misogynistic, if not downright misanthropic presenter) and Foreign Beggars associate Dr Syntax shaking his – er – well, just his shoulders really. There are a surfeit of cartoon day-glo visuals though – because this is MTV Baps yo!