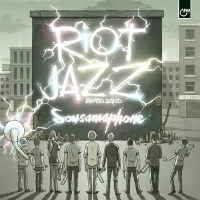 In all fairness to First Word Records, I was apprised of the existence of the Riot Jazz Brass Band‘s LP Sousamaphone nearly a month ago, i.e. prior to its release. What with the annual MB European surf tour happening though, it’s had to wait until now for MB coverage. But let’s not allow that delay to be an impediment to your funky edumacation. RJBB are a fifteen-strong brass funk ensemble broadly along the lines of the Hot 8 Brass Band, Hackney Colliery Band, Renegade Brass Band and the Daptone Horns Broken Brass Ensemble – to name four off the top of my head. Christ, when you think about it, there’s an alarming number of them aren’t there? If you looked out the window now you’d probably see a load of them in your garden grinning madly and waving their instruments at you. There’s no mistaking it – contemporary funk has got the horn.

With all that competition – how do the Manchester-based crew distinguish themselves? Well – it’s an eight-strong, just-over-half-an-hour long set of funk and jazz breaks – horn-drenched, obviously. Indeed it’s the sort of thing you might describe as brassier than a tart in a brass brassiere. Corn On The Cob starts with the band re-playing the intro to Akira Ifukube’s Godzilla theme before stepping up several gears into funky Mariachi-ish mayhem. Wey Oh sounds like a car chase soundtrack and the Lalo Schifrin-ish Suspicious Bulge wins the MB award for best title this month. Opener Slinky and Girls From Petrcane are the monkey favourites though for the hook and break respectively.
(Out now on First Word Records)