RICHARD CAITON: Listen To The Drums b/w You Look Like A Flower (Vinyl 7″) 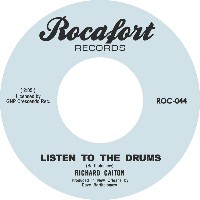 Rocafort Records sees in the new year with this 45 re-release of a pair of classics – Listen To The Drums and You Look Like A Flower by lesser-known New Orleans soul hero, Richard Caiton. This single effectively reissues Caiton’s debut 1964 single created at the studio of Cosimo Matassa where fellow Nawlins names such as Allen Toussaint, The Meters and Dr John also recorded. Of primary interest to MB readers and listed first on this release is Listen To The Drums which will not only have you listening to the drums but very much moving to them as well employing, as it does, a raw iteration of a classic northern soul beat. It’s a track that is unsurprisingly popular with any 60s R&B and northern soul DJs who (prior to this) have been lucky enough to both find and afford a copy. Over on the flip is slowie You Look Like A Flower which appears to have been the original A-side. Times have changed!
(Out now on Rocafort Records)

Posted on 4th January 2022 no comments