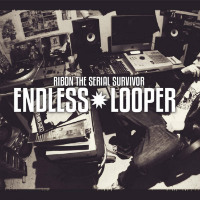 Can’t get enough of that 90s mpc/ sampling sound? Say hello to Barcelona-based emcee/ producer Ribon (or more fully, Ribon The Serial Survivor) who’s given free rein to his retro-hip-hop urges and dropped his all-instrumental thirteen track sixth LP, Endless Looper. And – well – doesn’t it remind you how good stuff not made on a laptop sounds? Yes, it does.

Opener Blow Shit Up is a vintage piece of sample collage and sounds like a beat you might have found on an early Dilated Peoples release. Not Dead channels the vibe of those old Dope On Plastic drops, Flame On is a tasty bit of Beasties-sampling trip-hop, Jazzik has a Mo Wax-ish edge and Supa Style Makers rocks a blaxploitation vibe with added spraycan sounds for that authentic early DJ Krush feel. Of course if these references all imply that the bpms are hovering in top 80s and low 90s bpm territory then you’d be right. For most of the LP anyway. Just to keep the b-boys happy though, he’s also bunged on the appropriately-named and pulsing funk of Rockfloor. Well – it would be rude not to.
(Out now Fresh Kingdom)

Posted on 29th February 2016 no comments