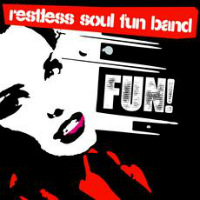 You’ve got to admire Restless Soul Fun Band’s grimly tenacious determination to have fun. It’s in the name for starters – of both the ‘band’ (the brainchild of dj producer Phil Asher) and the LP. It’s in the fact that this appears to be a re-release too having first seen light of day on a Japanese label nearly three years ago and it’s in the press release which takes you on a second person musical journey from Ladbroke Grove to Miami to Washington DC to Croatia before winding up in Sardinia. But it’s worth reining in your natural and perfectly understandable desire to throttle the person who wrote that though because this is a hugely varied LP which is considerably more enjoyable than its PR blah.

Stylistically the content could very loosely be grouped under some sort of soul/ urban tag with a heavy dose of retro beats – other than that the band don’t restrict themselves to anything as tedious as boundaries. Fun! takes in positively Balearic soul of a 90s bent (such as the Zansika-featuring opener), late 90s rnb (the Zansika-featuring Off My Mind, pitched somewhere between Erykah Badu’s poppier moments and Lauryn Hill’s jazzier ones), b-boy funk (Sunshine Smile), clattery, bleepy electronica (Good), the broken beat/ rnb crossover of Turn Me Out (featuring rapper Shea Soul) and the all-over-the-place ‘beat suite’ of Breaking It Down which visits all these genres and more in seven minutes – ending with a break lifted from the monkey’s favourite ever afro-funk track by Matata. Dopest track on the LP however is the funky clatter of Missing which turns on an uptempo usage of Salt’s vintage Hung Up break and features an oft-repeated hook courtesy of Zansika – yep – she’s on this quite a lot. Enjoyable then and, dare I say it…fun.
(Out now on BBE)