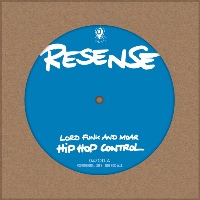 The first of two massive 45 booties today from one of the most discerning booty labels in the game is Resense 047 – a special DJ Oonops edition, no less – which finds the Brooklyn DJ pick out two dope cuts of uptempo funky hip-hop. On one side, Gelatine Thugs Do The Don’t Stop by cutting up brisk funk samples and Big Daddy Kane for the b-boys and girls. On the other is Hip-Hop Control – a re-flip Jurassic 5’s Feedback LP cut In The House which you may remember originally featured a Nu-Mark produced squelchy synth and 808 drum-powered old school beat. Moar and Funk have binned that though, with their own eyes clearly on the dancefloor and come up with an equally old school-sounding but much more fluid and funky drums-n-conga powered rhythm. Don’t sleep.
(Out now on Resense)