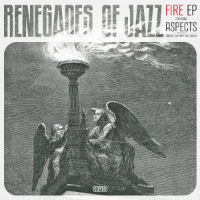 Fire is the first single off forthcoming LP Paradise Lost from ‘northern jazz’ don Renegades Of Jazz. Turns out he’s enlisted fallen rap angels, Aspects for mic duties and they employ their impressive powers of rhyme and rhetoric to spread the commandments of the adversary – you know – thou shalt add an ‘l’ to the end of any word ending in a vowel, thou shalt drink scrumpy and only scrumpy and scrumpy shall be all that thou drinkest – that sort of thing. Fanning the flames of the musical rebellion are Skeewiff, Smoove and Cadien who respectively render ROJ’s darker-than-usual b-boy artillery into a clavinet-n-synth-riddled scratch-attack, a minimal wah-wah backed battle hymn and – er – an electro boogie breaks assault. Turns out Cadien’s vision of hell is early eighties disco. He might have a point.
(Out 6 October 2014 on Agogo Records)

Posted on 1st September 2014 no comments