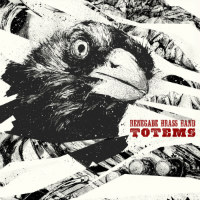 Has it really been three years since Renegade Brass Band’s debut LP Rhymes, Beats & Brass? It seems so and thus high time for a follow-up which they have duly provided in the form of splendiforous nine-tracker Totems which weighs in at one track longer than its predecessor. Only nine tracks? Damn straight – and even that requires a monumental amount of puff (not that kind) in a band containing 8 brass players – especially if you’re providing numbers as lively as this lot are. And of course, the recipe is resolutely brass-backed uptempo hip-hop in a twelve-piece crew, the balance of which consists of two percussionists, a live dj and emcee V3xation.

Among the tracks on offer are Peloton featuring a soaring sung vocal from Gina Walters and apparently a simple paean to the joys of cycling with no underlying symbolism though it makes up for this in obvious pop crossover potential. Indeed, if there was ever a track that cried out to be synched with a major televised cycling event, this is it. Also of note are the lively Latin-jazz-funk instro All Out, eastern-themed brag-rap The Sheikh, and the third track on the LP Torches & Pitchforks which is also arguably the LP highlight. Perhaps surprisingly, this last is the only real sign of the social consciousness and anger that often characterised the band’s debut and if it is less specific in the target(s) of its ire, that arguably gives it greater universality since a hook that runs, “If I was rich, I’d put it on the Ritz y’all/ Instead I’m three steps from picking up a pistol/ The state of it all has got me pissed off/ I’m coming with the torches and pitchforks,” caters for anyone at all except – well – greedy rich bastards. Who, come to think of it, fetishize any number of totems that could do with being torched.
(Out now HERE)