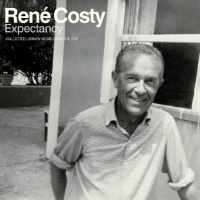 Bet you haven’t heard of Rene Costy – music teacher, classical violinist, jazz musician and composer. The last point is what concerns us here since our man composed a ton of library music in the seventies from which period one track, Scrabble, was discovered in short order in the nineties by a number of significant breaks and hip-hop musicians and made it onto tracks such as Howie B’s Turn The Dark Off, Common’s U Black, Maybe, Fila Brazilia’s DNA and J Dilla’s Fuck The Police. Which brings us to Expectancy – a long-overdue retrospective of Costy’s seventies library music career.

The first and longest ‘half’ of this double LP entitled Grooves contains seventeen funk and jazz-influenced instrumentals including Scrabble as well as no fewer than twelve previously unreleased cuts from the same era, many of which are eminently sample-able – oops – I mean which are dope and contain all manner of inspirational drum breaks and other instrumental sections. Among these are the wah-wah, synth and strings-powered psychedelia of Strange Dream, the detective series funk of Scrabble, the bassy jazz-funk of Right On The Nose and the bassy psych-funk of Ostinato Bass. Imagine something somewhere between Lalo Schifrin, Crosswinds-era Billy Cobham and 70s De Wolfe library music and you’ve pretty much got the feel – though of course this actually is library music written by Costy back in the day for labels like Chappell in London, Editions Montparnasse in Paris and Selection Records in Brussels. For the really hardcore heads, the second ‘half’ also contains a further eleven trippy soundscapes entitled Scapes.
(Out 3 March on SDBAN)

Posted on 17th February 2017 no comments