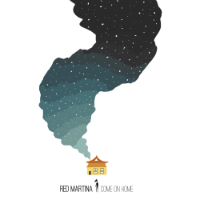 Right everybody – let’s find out about Come On Home and Red Martina.
Come on home to Red Martina? Yes please! You do mean her with all the skimpy ‘scale-mail’ bikini, red hair and massive broadsword, right?
No, that’s Red Sonja. This is Red Martina and it’s ‘they’ anyway. Oh yeah and Come On Home is their debut LP.
No ‘scale-mail’ bikini? Ah well – tell me more.
OK. Red Martina is the sum of the parts of vocalist Hayley Cass, Emcee Noesis, multi-intrumentalist Ish Quintero and a certain former producer for Jedi Mind Tricks. Together, with this LP, they aim to Stoupe (see what I did there?) to conquer the much maligned and latterly rather ignored genre of trip-hop.
Trip-hop? All that 80 bpm beats, crackly samples, spooky female vocals and stoned raps malarkey?
Er – well – there’s a bit of that sort of stuff on here yes, but there’s also the cracking reggae-influenced hip-hop cut Hiphoppocratic Oath, the excellent 122 bpm bounce of the appropriately named Dance For Me, the jazzy piano, trumpet, latin percussion-driven rap Seasons Change and a number of other cuts at tempos not normally associated with the heavy weed intake/ general navel-gazing proclivities of trip-hop.
Right so not exactly traditional trip-hop then?
No, not really – though Cass delivers an appropriate amount of late night chanteuse vocal style (see single Rhythm & Rhyme for example) and like I said, if you’re looking for something a little slower that’s on here too. Also the production’s as peerless as you’d expect from Stoupe and there’s clear pop savvy throughout – indeed, the Cass-dominated vocal tracks have something of early Morcheeba about them.
Pop savvy too? They might be able to make some money with this then?
Steady on – it’s 2014.
(Out 17 November on Badtape Music)

Posted on 13th November 2014 no comments