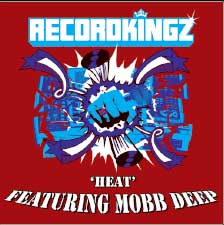 Recordkingz (a.k.a. Juliano of nineties hip-hop production duo The Creators) has released not one but two debut singles off forthcoming LP Heavyweight. One of these is a gigantic banger featuring The Beatnuts. The other one is this – which according to the press release was recorded in a sleepless rush in less than two days. That might explain why Havoc and Prodigy seem to be on rapping-autopilot while Recordkingz throws down an unremarkable beat, strings loop and guitar chop. It might be called ‘heat’ but it ain’t flames. Seek out the Beatnuts collab!(Read RECORDKINGZ – Heavyweight – Album review – HERE)
Out now on digital. Vinyl/CD tbc.