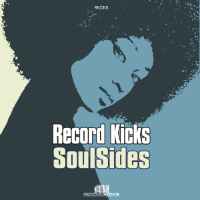 It’s summertime and therefore high time for your favourite Milan-based soul providing label Record Kicks to – er – provide a summery compilation of soul sides. Given their roster, it shouldn’t be too hard to assemble and whadyaknow? It isn’t. Say hello then to twelve-tracker Soul Sides which mixes up the new and the old, the soulful, the funky and the jazzy, the torch song and the heater. Recent LP cuts from Tanika Charles, The Tibbs, Hannah Williams & The Affirmations and Marta Ren & The Groovelvets all appear from the last year or two with the label delving further back into its catalogue for slightly older tracks from Third Coast Kings and Nick Pride & The Pimptones. Then, having opened the vaults, they dig deeper still, beyond the current decade, for oldies like Gizelle Smith’s June and the The Diplomats Of Solid Sound’s Soul Connection featuring The Diplomettes which is one of the album’s highlights along with the original 45 version of The Hawk’s Don’t Judge A Book featuring Little Hannah Collins. Looks like availability is digital only for now though.
(Out now on Record Kicks)