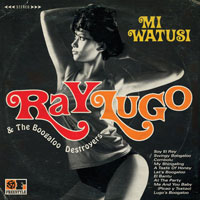 With the debut single from this (Swingy Boogaloo) in the wings, the full album itself, Mi Watusi, is due to drop a month later and finds Ray Lugo in full salsa caliente de New York mode channelling the spirits of the likes of Ray Barretto, The Lebron Brothers and king Tito. Honestly, it’s like the golden era of Fania Records resurrected. And why wouldn’t it be since what the man’s done here is cover a ton of old classics with the odd revised set of lyrics and a bit of rearranging here and there?

Coincidentally that’s pretty much the approach taken by The Excitements on their storming new self-titled LP of soul and rnb. I reckon the race is on to see whether boogaloo or mid sixties rnb is the next sub-genre de jour on the funk and soul scene in the wake of afrobeat taking over from last year’s winner northern soul. Anyone planning on releasing their own boogaloo project is going to need a sizeable amount of game though because this has it in spades – just the thing for changing up your funk and soul set on the steamy summer nights to come. Well, if you’re at least a thousand miles south of where I live. A man can dream though. Yo mami! Come dance with me!
(Out 20 June on Freestyle Records)

Audio player soon come! This’ll have to do for now:
Listen to Ray Lugo – Mi Watusi

Rays’ teenage years in New York saw him immersed in the vibrant Big Apple music scene, working as a roadie, band manager, studio engineer and label manager before taking to the stage in alternative rock and latin ska bands in the early 1990s and eventually forming Kokolo Afrobeat, who established a worldwide reputation through touring and recordings, Ray never lost that love for latin music he had experienced in his early years and often talked about a possible latin music project when he could find the time. In 2010, he finally achieved that dream. Ray Lugo & The Boogaloo Destroyers were born!

For the record, boogaloo was the New York fusion of latin music, rhythm & blues and soul which immediately became the soundtrack for second and third generation Puerto Ricans raised on son, guaracha, bomba and plena but who equally loved Tamla Motown, James Brown and Ray Charles! With it´s English and often double entendre lyrics and street-slang, it appealed to everyone. It didn´t matter if you were black, white, brown, Latino, Italian, Jewish or African-American…..anybody could dance the boogaloo!

On this album, Ray´s repertoire consists of classics from the likes of El Gran Combo, Willie Rosario, Ray Barretto, and Mongo Santamaria though Ray has re-arranged some tracks and added new lyrics and choruses to others. From the opening track ‘Soy El Rey Del Boogaloo’ to the final song ‘Lugo´s Boogaloo’, this album proves in the 21st century, boogaloo is still alive and kicking in New York City and Ray Lugo & The Boogaloo Destroyers are the leaders of the new school! Viva La Nueva Generacion!