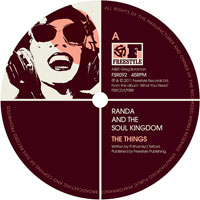 Blimey. Randa in disco shocker! The second album from Aussie funkers Randa & The Soul Kingdom, What You Need, is in the offing and according to the accompanying press release it promises to deliver more deep funk, sixties style soul and – if The Things is anything to go by – a bit of disco fever too. And what things is Randa singing about exactly? Going by the sound, I’d say silver hot pants, white leather roller skates and knee high basketball socks. Best get your white flares out then, you know you want to. Correctly appearing on wax, this is even more correctly going to be a twelve inch single – something which seems to be a rarer fish than it’s older but smaller sibling the seven inch, these days. Watch out for the Mooqee/ Beatvandals pounding nu-disco cheeky version too…

(PRESS RELEASE)
Randa and the Soul Kingdom released the self titled debut album on Freestyle Records to great acclaim, and sell out shows in the UK and Europe soon followed.

Now in 2011 Randa returns with her second album (produced by Aussie music legend Lance Ferguson (The Bamboos, Cookin On 3 Burners, Lanu)) ‘What You Need’ (FSRCD/LP088) which, whilst still tinged with a gritty funk feel, also delves into the 1960’s stomping soul arena, but this track, ‘The Things’ also taken from the forthcoming album, allows Randa to work out her disco diva muscles to quite stunning effect! Squelchy synths ride over an insistant disco beat, whilst Lance Fergusons scratchy guitar evokes the heady, hedonistic era of Chic, Studio 54 and Bianca Jagger riding a white horse across the dance floor!

The flip side it the totally exclusive OKMa Flavours version, beautifully excecuted by Randa’s co writer on this track, London based saxophonist and producer Jake Telford. This happening 12 inch single and download must surely be a big summer club anthem of 2011.