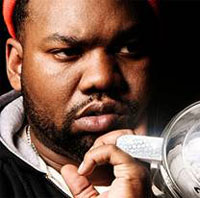 Yeah, that’s right – the chef will be cooking up some Tang-y (see what I did there?) delights for your aural consumption in the UK in March. I guess you could look at it as kind of like a live course between his last serving Only Built For Cuban Linx Part II and the forthcoming Shaolin vs. Wu-Tang. Yes, you did read that correctly – Shaolin vs. Wu-Tang will appear on the public’s table in only two months time and feature Ghostface Killah, Inspectah Deck, GZA, Method Man, Raheem DeVaughn, The Roots’ Black Thought, Jim Jones, Rick Ross and Nas. Blimey. On the other hand we are talking hip-hop time here so two months could be anything from six months to a – oh – a couple of years. Especially when you consider that Raekwon originally announced the completion of Shaolin vs. Wu-Tang a couple of years ago. Best get yourselves up to London innit.
Raekwon – Myspace
(PRESS RELEASE) RAEKWON TO PLAY LONDON IN 2010

“THE WU TANG CLAN” one of the most critically and commercially successful Hip Hop group of all time emerged in the mid 90s with a distinct style of kung-fu-movie-inspired, spectacular rhymes and gritty street Hip Hop. RAEKWON’s “Only Built 4 Cuban Linx” album is arguably the best solo release of a Wu Tang Clan artist and one of the finest and most influential albums in Hip Hop history. The group’s most consistent and one of the most acclaimed lyricists RAEKWON returns to Europe after dropping the critically successful album “Only Built 4 Cuban Linx part II” in 2009 in support of his new solo album “SHAOLIN vs. WU TANG”. His last album debuted at number 4 on the Billboard 200, at number 2 on the Top R&B/ Hip-Hop albums chart and number 1 on iTunes album sales charts beating Jay-Z’s Blueprint along the way.