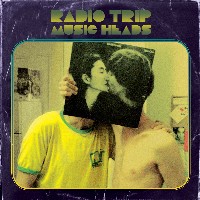 If you enjoyed the recent ‘first time on vinyl’ release for Radio Trip’s 2009 uptempo b-boy cut Computers Singing on 7″, you’ll be feeling like your cup runneth over with the re-release of the album from which that single came. That’ll be Radio Trip’s 2009 cut n paste sample masterpiece, Music Heads then. But why might this prompt such a joyous response given that said LP obviously already got released thirteen years ago? Because, originally, the album only got released on cd – the prevailing opinion back then being that vinyl was in its death throes. Mwaa-ha-ha-ha-ha-ha. And now here we are with cds pretty much – er – dead, and vinyl resurgent in the face of digital. And frankly, there could be no more appropriate format for such a kaleidoscopic journey into sound made in the tradition of great hip-hop and breakbeat records by Mixmonster and Schoolmaster of Israeli jazz-funk outfit The Apples.

Thus you can now thrill to Music Heads in the way that it was always meant to be heard from library-music-esque intro Home to the multi-layered Eastern breakbeat rhythms and melody of closer Hashish. In between, twelve other tracks take in a dizzying array of influences that also include jazz, rock, psych, hip-hop and blues in a top-notch collection that includes both b-boy as well as more downtempo breakbeat tunes. Naturally a highlight is dance-floor classic Computers Singing, but of particular note are also the loose minimalist groove of Whole Wide World, the psych n blues Gambling Man and the evocative soundtrack-isms of Closer.
(Out now on Jalapeno Records)