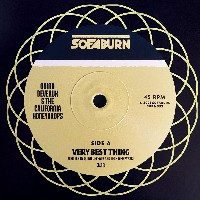 Fresh out is new single Very Best Thing on which renaissance soul man Quinn Deveaux teams up with The California Honeydrops for a very sweet retro groover. It’s all warm buttery bass, guitar chanks, organ licks, horns and of course our Quinn’s yearning voice. Turns out, his missus has up and left him and he’s speculating she’ll be regretting that at some point in the near future because, obviously, he’s the best thing she ever had. How to represent that via the audio-visual medium of the music video though? Ooh, I know – maybe a concept whereby our man turns up at some sort of ‘museum and art gallery of past relationships’ which contains a range of interactive installations all in some way related to his missus? I mean ex-missus. Mind you, if you were him, that would do your head in a bit. Probably explains why he starts wrecking the joint on the outro. B-side Take You Back, slows things down very slightly and a southern twang creeps into the music as – whadyaknow – the ex isn’t enjoying that living on her own trip – and Quinn very kindly offers to, well, take her back.
(Out now on Sofaburn Records)