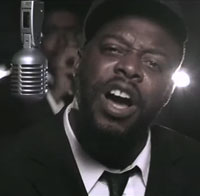 It says here that Quakers are a 35 person hip-hop collective with a 41 track album out now on Stones Throw. 35 person?! Are they taking the piss? Imagine that lot on tour – they’ll wish they fucking stuck to making oats. As for 41 tracks – I don’t even have time to preview something that long. Luckily, I’m only required to comment on the video for Fitta Happier which features Stones Throw lyrical legend Guilty Simpson and Madlib’s mate Medaphoar. It’s essentially these two spitting battle rhymes over massive brass, a bassline sampled from dirge-digglers Radiohead and percussion so minimal it’s virtually spectral. Hip-hop – but the kind Godzilla wakes up to. Listen to the LP HERE – Fitta Happier video and soundcloud player below: