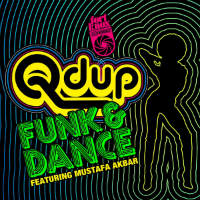 Funk & Dance is the latest single from QDup as he makes a song and dance (literally) out of his return to the Fort Knox Recordings label. How does he do this? By getting one other FK regular under a groove – vocalist Mustafa Akbar – and then the pair of them channel George Clinton by way of a bit of twenty-first century funk production. K-Lab and Skiitour are on hand to make sure the public get their respective glitch-funk and neo-disco fix too and the whole package is rounded off with instros of everything. Party people get on down!
(Out now exclusive to Beatport, elsewhere from 23 June on Fort Knox Recordings)