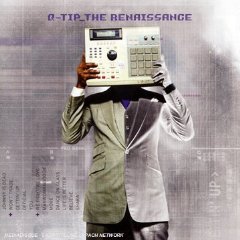 Finally, former A Tribe Called Quest main man and nasal-voiced legend Q Tip has organised a second solo coming and this time around he’s largely incarnated himself as a neo-soul-hip-hoperator soon to be sound-tracking any wine bars near you that have survived the credit crunch.
As you might expect (if you caught first solo LP Amplified back in ’99), it doesn’t often sound much like ATCQ but don’t go expecting it to serve up quite as many club-bangers as Amplified either – there’s nothing to rival Breathe And Stop or Vivrant Thing beats-wise here. The watchword is basically ‘smoooooth’. That’s not to say there isn’t the odd track that you couldn’t get all stank to. Won’t Trade is built around a soul loop and a simple but serviceable break as is Move while Man/Woman Boogie finds Tip clambering aboard a fat funk b-line and uptempo shuffling beat (not dissimilar to a sped-up version of the break from Vivrant Thing) to consider the interaction between the sexes.
It does have to be said that this is lyrically stronger than Amplified, though admittedly – that wouldn’t be a particularly taxing feat. On Official (one of the few tracks that is a bit of a ringer for ATCQ) Tip announces “Major attraction, trouble distraction/ Scramble up my name and it still come action.” It’s a sentiment I’d be less inclined to argue with if there were a few more bumps like this on the LP and less of the RnB-ish sludge and dodgy celebrity collaborations – which pretty much amount to the same thing here. And since no solo Tip LP would be complete without some sort of dodgy celebrity collaboration he makes sure that on this there are three. What with ‘new’ metal not being quite the thing anymore Tip wisely avoids repeating the mistake of teaming up with miserable Goths like Korn but makes the new ones of hooking up instead with celebrity mates Norah Jones and D’Angelo and Rafael Saadiq – he hooks up with Amanda Diva too but that track isn’t dodgy. Apart from her bit. On all three tracks the guests provide the hooks and in the first two cases it’s gilding the lily – both tracks would have functioned better as straight up raps. Plus Tip manages to sound like he’s using one of those machines that throat cancer patients hold to their vocal chords at one point on Life Is Better and that’s just not right. The track with Saadiq is just plain wack.
The bottom line? The clinical production on this is so effortless Kanye probably breaks into a sweat just contemplating it. B-Boys and ATCQ nostalgists are just going to have to accept that The Renaissance isn’t going to ignite a desire to take up breakdancing or turntablism while on the plus side Tip’s a sly old dog – and I can virtually guarantee that if you put this on you can expect your missus get all pliable. And that’s never a bad thing right?
Out now.
Listen to Q Tip – The Renaissance
Buy Q Tip – The Renaissance

Posted on 5th November 2008 no comments