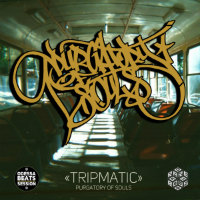 You can tell it’s January because it doesn’t seem like anyone can bear to release anything that isn’t trip-hop. Mind you – when it seems like it’s night for most for the day and you feel like you’ve got S.A.D. even when you haven’t, you can see the attraction of slo-mo beats redolent with vinyl crackle. It’s basically because trip-hop is the musical equivalent of a duvet – and this month seems to be a vintage one for hip-hop’s sleepy cousin as Ukrainian beatmaker, Purgatory Of Souls, gets all Mo Wax on your ass with his Tripmatic EP, furthering the early Nightmares On Wax vibe suggested by, er, Vibe Town on the recent Odessa Beats Session comp. and adding more than a dash of early DJ Krush. From the opening eastern tones of Night Rider to the closing spooky minimalisms of Buckdown, this is the very thing if it’s a bit early in the month to be waking up for you.