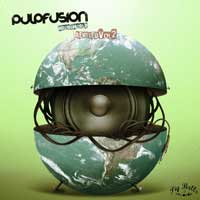 News of Pulpfusion’s Wrong World Remixed Vol 2 arrived at just the wrong time two weeks ago dropping on to monkey’s virtual doormat hours before the annual monkey summer holiday. Still, to redress matters here we are now in a brief examination of what happened when the Swiss beat assassin bravely handed over the keys of his Wrong World LP for the second time this year to a baker’s dozen of remixers.

Essentially you can expect a variety of adventures though the breakbeat asteroid belt and on into the outer reaches of heavy electronica. This is all as you might expect from re-workings of Pulpfusion’s ghetto metal originals and some of the stuff on here could anchor a ship in heavy seas – stand up Outcry and Acidicy. Tosses & Varvez arguably get the prize for most funky cut, with their buzzsaw reversion of Freeze To Death In A Global Warming, though Monstaphunkaz run them a close second. Ram Skank gets the ‘most largin it in a dark basement’ award, Gregod sweeps the ‘most Orbital-alike’ award and ‘most house-y’ awards, Nemoy drops the most ‘should have been a Wass Records release’ and Zamali takes the cake for being the ‘most Mo Wax-ish’ for his Small Hands On Big Weapons. We’ve all been there.
(Out now on Pigballs Records)