PULPFUSION: From A Kid To A Man 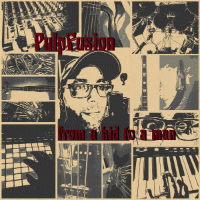 Yet another project that dropped in the festive season and was thus in danger of getting lost amid all the nonsense that such a season entails is the From A Kid To A Man LP from a man who has been off the monkey radar for a long minute – Pulpfusion. Nevertheless, Terence Thoeny (for it is he) dropped this instrumental opus of fourteen tracks (plus three bonus cuts if you cop it on his Bandcamp page) on 20 December by way of marking his return to making breakbeats following a hiatus during which he played guitar for Noisepilots’ and taught music production.

And the influence of both those diversions can be heard on the album. While the opener and title track might provide a keys-led splash of jazzy breaks, things get harder and darker on the whirling guitar-infused drum breaks of Illusion, even if it does have wafty wuxia-soundtrack influenced flutey bits. And it’s this second track’s higher bpms and guitars which set the tone for a significant proportion of what follows. Put the Pedal Down is fairly hectic guitar-led breakbeat along with the distinctly late-nineties-ish The Guy In Yellow Jeans. Indeed, it’s not until next track, Dark Park, that things slow down at all and the guitars take a break. They’re back with a vengeance for the emo-breaks of Don Champignon though before things go all Crystal Method for Dream Of You and subsequently Razorblade unites both strands of big beat for a positive beast of a cut. And so it goes until the end of the LP weaving in and out of late-nineties/ early 2000s influences like the bastard lovechild of Crystal Method and Death in Vegas while chucking in the occasional ambient slice of synth whimsy such as Mother. If you like your breakbeat/ big beat heavy on the geetar and a bit emo – this one’s for you.