PULP FUSION: Hands Up! This Is A Bank Robbery 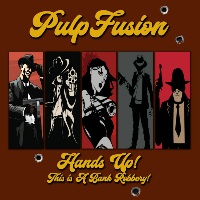 Just shy of a month old (and therefore long overdue some monkey shine) is the new long player from Swiss producer Terence Thöny a.k.a Pulp Fusion, entitled Hands Up! This Is A Robbery on which he charts a course through funky breakbeat-powered gangster movie soundtrack territory. Currently digital only, the eleven tracker starts with a liquid dnb-ish opener, ends with something positioned roughly where trip-hop meets big beat and contains pretty much every variation of funky breakbeat styles between the two.

The aforementioned opener, Black Becomes Darker, is by far the fastest cut on the album at 171 bpm – though because of its jazzy nature fits in stylistically. We’re immediately in more conventional breakbeat territory with banging second cut Bank Robbery as replete with vintage keyboard work as its predecessor. Leave Now, one of the LP highlights, is probably the track most evocative of 90s big beat with snarling guitars recalling the work of everyone from Chemical Brothers to Death In Vegas while the windmilling breakbeat has Propellerheads written all over it. Forgotten Weapons has a similar vibe before we slow down for the still guitar-drenched but slower Don’t Trust A Prayer. A Plan Is A Plan verges on the broken beat-ish while another highlight, Wait This Should Be A Car is back to funky guitar-led big beat business once more. Where Is The Money Honey? would be an out-and-out, uptempo big beat noisefest were it not for the tense minute of beatless ambience by way of an extended bridge in the middle of it while The Late Lazy Bastard offers menacing midtempo breaks, Counting Money deft Crystal Method-ish vibes and closer The Prison a suitably downer-ish tone. If your poison is late-90s to early noughties party breaks, you’re quids in with this!
(Out now on Pig Balls Records)
ORIGINAL TEXT COPYRIGHT: Stone Monkey/ monkeyboxing.com (2021) – Pulp Fusion – Hands Up! This Is A Robbery

Posted on 12th September 2021 no comments