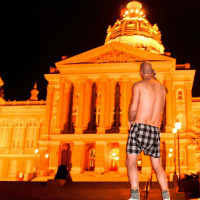 “It’s me walking around southside Des Moines, in my socks and my underwear.” So runs the answerphone message that opens Ptate‘s new DMNY-produced Socks And Boxers LP. And you thought the only interesting thing about Des Moines was the bizarre coincidence of both Bill Bryson and Slipknot hailing from there. The name Ptate, incidentally, may ring bells with regular MB readers since this man has featured on the two best cuts from two superb LPs from French beatmaker Roger Molls – which you’ll find on Volumes. 1 and 3 of the annual MB mixtape ‘Filthy Rhythm, Dirty Soul.’ And Socks And Boxers would indicate that the rapper isn’t just a two-trick pony.

For he start he’s had the presence of mind to team up with production team DMNY. This consists of b-boy-turned-producer ReKloose and old school Puerto Rican hip-hop head (and Bronx Harlem-to-Iowa transplant) Exo. Which means funky shit – like Midlife Crisis. The track was meant to be a one-off but clearly laying down the beats and and ripping the piss out of certain men of certain age prone to buying sportscars and drunkenly declaring that they ‘could have any woman in this place’ was too much fun to stop at one. Indeed throughout the LP, Ptate finds the time to adopt a range of off-kilter tragi-comic personalities (or the role of observer thereof) whose mental underwear spends far too much time on public display while DMNY match his lyrical antics with fresh beats. In short, quality, quirky, funky midwest hip-hop – sort of like some of the Rhymesayers stuff. But from a bit further south.
(Out now)