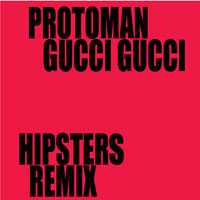 Only the other day I was wondering what had happened to ‘Gunshine State’ rapper (and former Rawkus signee) Protoman when onto my virtual doormat drops this remix of him jumping on Kreayshawn’s Gucci Gucci beat. However, where Kreayshawn had a crack at ‘basic bitches’, Protoman gives a lyrical shoeing to hipsters and their penchant for irony. Serve them right too with their skinny jeans, stupid wispy moustaches and ‘art fag’ hair. And wearing shoes with no socks. Not to mention Vans, Converse, flannel shirts, being vegetarian and vinyl records. Waaait a minute…those last ones…is he being ironic? Who knows? Now that is ironic. You may wish to avail yourself of the DL below while you contemplate such postmodern madness and feel free to compare and contrast the mildly annoying original with Protoman’s wryly amusing piss-take on the videos below. Press guff below all that – he’s got a new album on the way you know! And don’t forget to swing by Protoman’s bandcamp – there’s loads of free shit on there – including him jumping on beats by Camu Tao and Jake One. Ooh he’s a law unto himself isn’t he?

(PRESS RELEASE)
Miami’s own Protoman (formally late Rawkus Records) had some time to relax after recording his new album due out later this year to remix his own version of Kreayshawn’s ‘Gucci Gucci’ single with his own theme – hipsters. It doesn’t sound at all like a diss record toward Oakland’s ‘White Girl Mob’ member, but it’s definitely a funny flip on the original with his nearly identical Bay Area flow. Hipsters, beware.

Posted on 3rd August 2011 no comments