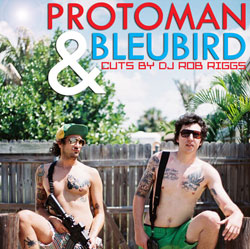 It’s not all vice, corruption and extreme violence in Florida but if, like me, you’ve never been there and your conception of the place is formulated by Miami Vice, Tim Dorsey, and – er – the news…it mostly is. Contrary to the claims of Newport, Wales’ Goldie Lookin Chain, it’s not so much guns or rappers who kill people as the ‘gunshine state’ itself. Ripped and buffed emcees Protoman and Bleubird are the latest enemies of the Florida tourist board and here they casually satirise pretty much every aspect of life in that neck of the woods with this drums-heavy boom-bap Dantanna beat. Coming on not unlike an east coast version of early Foreign Legion, I can’t think of a single reason why you wouldn’t want to avail yourself of this right now since it’s both very free and very fresh:
Protoman & Bluebird – Guns Don’t Kill People (Florida Does) – FREE DOWNLOAD (Mediafire)
Protoman & Bluebird – Guns Don’t Kill People (Florida Does) – FREE DOWNLOAD (Usershare)
(PRESS RELEASE) Two Florida rap veterans, Protoman (DMG, Rawkus 50, FW4S) and Bleubird (Epidemik, Grimm Image Records) finally trade verses on a track entitled “Guns Don’t Kill People (Florida Does)”. This funk inspired breakbeat produced by Dantanna also features a fury of cuts by DJ Rob Riggs (Scratch Academy). The Florida themed record is an ode to the randomness and dysfunctional hidden culture of “The Gunshine State”.