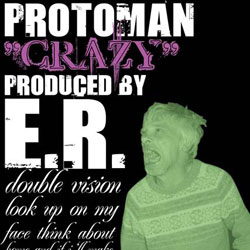 He might be an emcee from Florida but he’s no Flo Rida. Yep, Protoman’s on a Ugly Duckling/ Foreign Legion tip again with Crazy – essentially a big fat bassline, a nicely uncluttered breakbeat and our hero sensitively exploring the fine line between love and out-and-out psychosis. We’ve all been there. Cop it below:

PROTOMAN – Crazy (Listen/ Download – via Usershare)
PROTOMAN – Crazy (Download via Mediafire)
(PRESS RELEASE) Protoman calls upon the assistance of Miami based producer E.R. from the group The Vagabonds. The song is called “Crazy” and according to E.R., the track is “based on an inside look of a man who’s been driven wild by a woman”. The production on the track is very upbeat and up-tempo. Very funky and very different from most of the stuff Protoman has jumped on recently. E.R. is definitely setting himself up to be a producer to watch for. The crisply drums mixed with a driving bass and a set of horn samples with incredible personality. As far as the track, well, Protoman definitely goes in. Protoman’s politically incorrect attitude and his “I don’t give a f*ck” flow – definitely is refreshing to hear. Whatever you can imagine the perfect love song that ever existed sounds like…well, this is pretty much the complete opposite of that. And for this specific instance, it works. Its like a love story gone wrong. Terribly wrong.