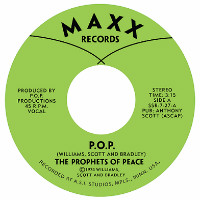 By way of a chaser for excellent recent LP compilation Twin Cities Funk & Soul: Lost R&B Grooves From Minneapolis St Paul 1964-1979, Secret Stash Records now drop a previously-unreleased Prophets Of Peace 45 from back when it was all flares and ‘fros. The Minneapolis-based 8-piece released at least one single back in the mid-seventies and began work on an LP but it was never finished. Clearly this wasn’t part of the master plan since vocal cut A-side P.O.P was their theme song – surely the last thing you’d want to slept on if your career was to be curtailed in an untimely manner. Secret Stash are here however, to finally give this sax/ organ/ wah-wah nugget the release it deserves backed with a second of three unreleased tracks from a four-track 1974 studio session – horns and keys-led instro 46th Street Bump Time. And they do it with love too – pressing 500 copies and even putting the exact label that would have gone on the original release had it come out back in the day. Well – if a job’s worth doing, it’s worth doing right. Right?
(Out 23 November on Secret Stash Records – cop it via their online store)

Posted on 7th November 2012 no comments