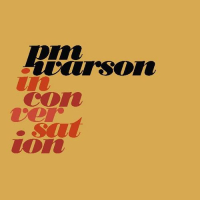 Already lauded by the likes of Craig Charles and the Fred Perry clothing company – there’s set to be a lot more conversation about PM Warson when his debut LP, True Story, drops this April. In the meantime here’s In Conversation, the first single to be lifted from said long player and demonstrating the same sense of retro soul and R&B groovin’ evinced on Warson’s breakthrough cut (Don’t) Hold Me Down. Where that was an upbeat mover though, this one is a moodier affair alternating between sparsely orchestrated verses and soaring hooks. The girl group backing vocals are in full effect though, as is the judicious use of castanets – (Georgie) fame can only ensue.
(Out now on Légère Recordings)

Posted on 20th February 2021 no comments