PLAN B: The Defamation Of Strickland Banks – 2010 – Album review 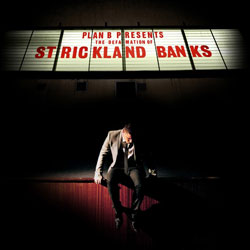 Everybody knows by now that rapper Plan B barely raps on this and that contrary to his gritty rhyming (in that Carribean-inflected London accent all dem yout’ got nowadays) he mainly sings in a surprisingly good falsetto. Everybody also knows that this is a ‘concept’ album accompanied by a short film, wherein B is a soul singer called Strickland Banks ‘what gets framed by some puddy cuz he won’t put out’ – or something…So there’s no need for me to get bogged down in all that – I can just focus on the music. Since this is probably one of the biggest releases that’ll be checked on monkeyboxing.com this year, we thought it best to go the track-by-track route just like blogging giant Byron Crawford does. Or did. He doesn’t seem to be doing music lately.

LOVE GOES DOWN
I bet she does. Back in the eighties the charts couldn’t beat away with the shitty end of a stick all the singers who channelled original sixties and seventies northern soul but with too-clean production and the rhythm section too low in the mix. Maturing over twenty years, this sound has itself now acquired an attractive sheen of nostalgia. What were the chances? Not the best track by far – but then who starts with that? Also sees ‘B sound a little bit like a young Alison Moyet.

WRITING’S ON THE WALL
That’s more like it, more lively, great melody, big strings – the money men have probably already chalked it up as a future single.

STAY TOO LONG
The first single off the LP – heavy Kinks-style guitar and mod-style organ, goes a bit rap-rock (in a rare good way) at the end. Classic and deserves better than to be the end-of-the-night anthem of pissed-up football hooligans it probably already is.

SHE SAID
Massive soul/ doo-wop second single which alternates percussive style throughout. It’s the one where he’s in court in the video with dancing barristers. Yeah right. Probably don’t need to say much more about this.

WELCOME TO HELL
The first of several numbers in which ‘B sounds a bit like Boy George funnily enough. Funky syncopation and choral backing. More single material.

HARD TIMES
Probably the most eighties-trying-to-be-seventies northern-soul-y of the lot. Yet more single material.

THE RECLUSE
Changing it up again – bit more indie-rocky – Boy George back again on the chorus – and yes, it could well be a single.

TRADED IN MY CIGARETTES
Lovely guitar plus choral ‘ahh-ing’ intro. He’s inside now and on about handing over the Marlboro Lights so he doesn’t get made into someone’s bitch. If there’s justice this will be a single.

PRAYIN’
Another uptempo one, bigger percussion – keeps up the angst – could also be a single.

DARKEST PLACE
Ooh. Hang on. Bit more rapping. Jail’s not very nice – drops in the word ‘shank’ – – very topical – would have been an obvious single with it’s sung chorus were it not for all the other even more obvious singles.

FREE
Back to the northern soul – this one sounding genuine rather than eighties pastiche – and finds our Strickland apparently apologising to his missus. The real one, not that slag that got him put inside. Did I mention it could easily be a single?

I KNOW A SONG
A young Alison Moyet again. See comments on Darkest Place above re. its single potential.

WHAT YOU GONNA DO?
Boy George back for one last bite at the cherry. Not the best track but then who ends an album with that? Bit more rapping in case you forget ‘B’s a rapper – we seem to be at the retrial now – lazily leaves the situation unresolved forcing the listener to return to the start to listen more closely for clues as to the likely final outcome, the wily devil.

COMMENTS: I can’t remember the last time I heard an album that had this many decent potential singles on it and for that alone it deserves five stars. References pretty much every decade of music from the sixties onwards and offers something for pretty much everyone whether they be at the soul night, the indie night, the mainstream townie superclub night, in the car or on the bus or just at home doing the washing up. Brer done good innit.
(Out now on 679)