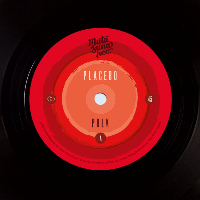 Lovers of the first wave of jazz-funk (and sample-fiends) take note, this 45 reissue of two classic cuts off Placebo’s 1973 LP – er – 1973 is still available but unlikely to be so for long – given the sold out status of much of Matasuna Records’ back catalogue.  The two tracks in question – Polk and Balek – are the work of Belgian jazz-funk outfit Placebo rather than hitherto unknown early material from the 90s alt-rock outfit of the same name of course, and in any case Brian Molko would have been all of a few months old when they were recorded, though in a weird twist, he was actually born in Belgium.  But back to the matter at hand and it’s a tale of two sides with Polk being the sort of thing you might liken to something off Billy Cobham’s Crosswinds LP were it not for the fact that, Crosswinds came out a year later.  The flip, Balek, is a rather different kettle of fish, making heavy use of early synthesizers and exploring an altogether more psychedelic sound, clearly approved of by Mos Def and El Da Sensei, both of whom have previously sampled it.  Both tracks have been re-mastered for the dopest sound, and it’s even a first time on vinyl for Polk.  Don’t sleep.
(Out now no Matasuna Records)

Posted on 24th September 2020 no comments