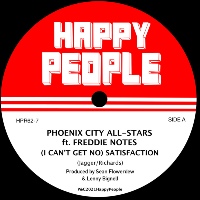 Now I know it’s already been a bit of a week for retro reggae thrills, but this one is massive and its promised vinyl 7″ appearance has taken a while. Indeed it’s just over eight years since monkey first posted about ska supergroup Phoenix City Allstars’ gigantic Studio One-style ska cover of The Rolling Stones’ (I Can’t Get No) Satisfaction, featuring vocals from Jamaican legend Freddie Notes and exactly eight years this month that it was – er – coming out on 45. Still, it seems you are finally getting some satisfaction on that front for the vinyl 7″ finally drops early next month with the band’s instro cover of Play With Fire on the flip. For those who still need schooling, it was Freddie Notes and his band The Rudies who sang the original of Montego Bay on Trojan Records, while Phoenix City Allstars is a band comprised of members of Pama Intl, Intensified, Kasabian, The Sidewalk Doctors, Dub Vendor All-stars, The Delegators and Ska Cubano. Your wax options for the single are red or black vinyl; 159 of the former and 258 of the latter. Don’t go snoozing now!
(Out 8 October on Happy People Records)

Posted on 27th September 2021 no comments