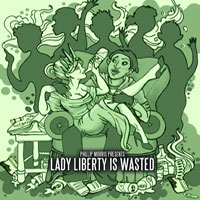 Hats off to Chi-town’s Phillip Morris, for avoiding such rap clichés as restyling his name to reduce at least one part of it to an initial and/or adding a ‘street’ nickname. True, this does mean he sounds like some sort of interior designer but I suspect he’s unlikely to give a shit about that since his tongue is frequently in his cheek throughout this collection of unreleased back catalogue cuts and a few new ones. A particular strength with this has been Morris’s choice of producers for, aside from himself, he’s clearly drawn from pretty much all over the place and checks in over a wide variety of beats that include the almost drum n bass of iSmoke and many flavours of boom-bap, the finest example of which is the Tensei-produced Requiem For A Long Winded City. Less weird and annoying than Anticon’s Themselves, more accessible than Aesop Rock and less emo than Rhymesayers stuff, we’re still kind of in that neck of the woods in terms of both Morris’s style of slightly nasal raps and the off-kilter beats and rhymes whether the latter (as they generally are) be self-mocking or exposing the sordid underbelly of the American Dream. Not that there’s anything wrong with sticking it to the man, right? Definitely worth a listen, all the more so if you’ve been missing the days you used to sport an empty Eastpak rucksack on your urban perambulations.

(PRESS RELEASE) A mere 6 months after his last release “The Truth Campaign”, Phillip Morris released his newest album “Lady Liberty is Wasted”. This is a compilation of unreleased older songs, and a handful of new songs that were created both while he was working on The Truth Campaign, and after it was released. This album traverses a wide range of subject matter including, but not limited to: His nerdy endeavors (Get My Nerd On), Chicago politics and race relations (Requiem for a Long Winded City), having a healthy obsession with tattooed women (Bad News), and even a song that compares life’s struggle to the video game Final Fantasy (Squared Away). The album culminates with the title track “Lady Liberty is Wasted”, which finds Phillip Morris attempting to seduce the human personification of America (Lady Liberty) from the perspective of a lobbyist, in an attempt to use her for his own personal gain. If the description alone doesn’t serve to convey this will not be your typical hip-hop record, the artwork (drawn by Katie Kroeck) does a great job of foreshadowing the erratic journey that awaits your eardrums. Featuring production from around the country and around the globe: S1 & Caleb, Herma Puma (US/UK), Tensei, Mister Digital (United Kingdom), Kid Static, Nevahmind (Sweden), Vans Beats (Germany), Japandrew, Game of Death, and Phillip Morris.

This album is available for instant download at: http://phillipmorris.bandcamp.com/album/lady-liberty-is-wasted where listeners can set their own price.