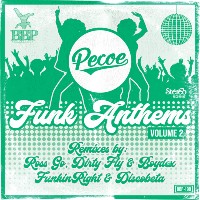 It’s funk-powered party breakbeat time again as Oz-based producer Pecoe delivers Funk Anthems Vol. 2 and five more surefire dancefloor bumps, four of which get a remix from a labelmate. Sucker You Missed finds an MC Lyte ‘pella atop a disco-funky groove that even includes Mexican-style trumpets at one point while the second original is the more rhythmically exciting Babe which also includes a more layered sound palette and stanky guitar sounds. The remaining three originals are Highly Strung, I Know What You Want and Take A Stand. The first two of these are heavy on the synths and nod to the 80s – Highly Strung with boogie stylings and I Know What You Want (the monkey’s favourite cut on this one) applying a Jan Hammer-ish approach.  The remaining one is Take A Stand (the only cut not get a remix) which returns to the lively upbeat funky breaks of the earlier cuts. Remixes come from Dirty Fly & Boydex who apply wobble to Sucker You Missed, DiscObeta who go four to the floor and heavy up the synth bass on Babe, Funkinright who re-imagines Highly Strung as performed by a buzzsaw and Ross Go who switches to more complex percussion and applies a range of FX to I Know What You Want.  You know what you want alright!
(Out 29 October on Breakbeat Paradise)