PECOE: For The Funk EP 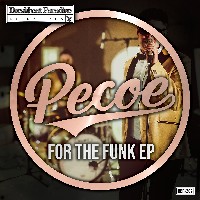 Eight releases into his career as a BBP artist and Oz producer Pecoe is still giving it up For The Funk on his new EP. Things kick off with the title track, a synth-bass powered beast featuring a female shout-out motif, followed by Make A Miracle which cannibalises both The Jackson Sisters and MC Duke over a pounding breakbeat and Eye Of The Tiger-style guitar. Hand In The Air completes an initial trio of funky breaks cuts and similarly features fretwork that takes its cues from the 80s. The final two tracks expand the stylistic envelope however – albeit while still taking sonic cues from the devil’s decade to provide overarching continuity. These two consist of the somewhat more subdued and moody Positive Vibes on which the groove verges on dark disco sound punctuated by a dancefloor vocal motif while A Good Feeling heads in the direction of uptempo broken beats with an assist from pounding 80s bass and a little bit of Etta James. All party business then!
(Out now on Breakbeat Paradise)