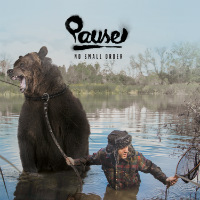 If an LP features guest vocal turns by both People Under the Stairs’ Double K and Breakestra’s Mixmaster Wolf and the same LP also features a bit of turntablism from the same two, it’s a fairly safe bet that the man behind the project has got something going on. If the PR tells you that the man behind the project grew up with the Bay Area hip hop scene but is now listening to old bluesmen, you know the vibe of what he’s got going on is probably going to be good. If the PR also tells you that the man behind the project taught himself to play flute, guitar, harmonica, keys and alto sax (not to mention built his own recording studio and has his own production company which he designed the logo for) you know he takes his shit seriously. Though given the LP cover and his claim to make everything while stoned and then check it while drunk we don’t seem to have a man who takes himself seriously. So you should have no cause for pause when it comes to checking out rapper/ multi-instrumentalist/ producer Pause‘s No Small Order…

…which you’ll find is thirteen tracks of funky and/or blues-tinged boom-bap rap. The variety runs from the stoner blues guitar-powered opener Have You Seen to the kicked-back, funky flute-loop vibe of single Get High. It’s difficult to fault a man who builds a beat around the Bold Soul Sister/ Simple Song type b-line that powers Breaking Bad or a man that uses Trinidad Oil Company’s monster tropical funk bump Feelin’ Alright as the inspiration for a beat on a track about partying either. Lyrically there’s a sizeable quotient of tongue-in-cheek brag rapping along and much focus on partying and its attendant excesses – notably on Breaking Bad which manages to cover all of the above, “We all can get it – check a real MC I stomp tracks like packs of black wildebeest/ Strong and hairy like a brown bear, especially down there, we build for the future in my field of dreams…” Best cuts include the aforementioned Feelin Alright featuring Mixmaster Wolf and Breaking Bad featuring Joe Con, the stripped back stomp of Wonder Why also featuring Joe Con and the heavyweight blues-funk powered Bad Man – again featuring Joe Con. In fact, if it’s got Joe Con on it’s got it going on. Yet another solid hip-hop LP for 2015 then and we’re only two months in.
(Out 3 March on DZK Music)

Posted on 19th February 2015 no comments