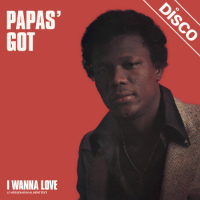 Papa’s got a re-issue and an Al Kent edit! Nope nothing to do with James Brown – other than the fact that Jamaican-born Rowland Abrahams loved dancing to Mr Dynamite so much he got a JB-related nickname – Papas’ Got – complete with misplaced apostrophe. Which he then used when recording his ’79 disco LP I Wanna Love in Paris. Said album yielded a killer funky-afro-disco biscuit of a title track which Rocafort Records have seen fit to issue a 12 inch re-issue of here. And of course there’s an Al Kent edit on the flip because no such re-issue can be in the offing without disco don Al Kent a) hearing about it and b) getting his piece of the pie:
“Oi! I do disco round here, see? You wanna do disco, you let me do an edit right?”
“Ye-yes, Mr Kent. Sorry Mr Kent.”
(Out now on Rocafort Records)

Posted on 13th February 2017 no comments