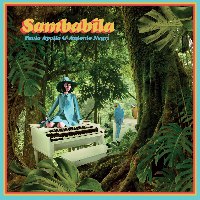 A compact little slice of culture here as The Link Quartet’s Paolo Apollo gets his Brazilian groove on with dad Antonio Negri on the sticks for their 7″ Sambabila EP. No, they haven’t invented a new sub-genre, Sambabila is merely a portmanteau of samba (for obvious reasons) and San Babila – one of Milan’s most famous squares. Er – why? Well because while neither of the two have actually been to Brazil, they’ve long admired its musical heritage from afar in their home city of, you guessed it, Milan. Cue four groovy little numbers with track titles that also try to blend Brazilian musical references with something Milanese. The music seems all the way Brazilian though (at least to these inexpert ears) and should encourage no end of shimmying in lifts, lounges and the sort of easy listening venue where people can be found gracefully sliding across the floor and shaking their thing to the sound of, o maior país da América do Sul.
(Out now on Spinout Nuggets)