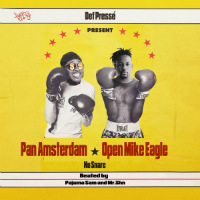 Hopefully you caught all the fuss about Pan Amsterdam’s superb debut LP The Pocket Watch back in the spring and are eagerly looking forward to more. In which case, you’re in luck since Pan Am is back with new single No Snare and in the company of Mike Eagle no less as the pair of them trade finely-crafted witticisms over the sort of ambient jazz-hop(this time provided by Pajama Sam and Mr.Shn rather than thatmanmunkz) that has characterised previous efforts. But what are they on about? Pan Am lands an early blow with something about being, “Up in the Shire with Bilbo/ Baggin some gracefully-aged female elves – no Frodo/ Nude category recommended yo!/ Gotta watch it on a different server – Firefox not Chrome.” Indeed – can’t beat a bit of ‘private browsing’ can you PA? But then, Open Mike Eagle swoops in with something about having a, “short shelf-life like an iPod Nano.” That’s a low blow Mike – I’ve got an eleven year old Gen. 1 that’s still going! Check it below to decide who delivers the knockout and marvel at the trumpet skills of Pan Am’s real-life alter ego Leron Thomas. Oh yeah and check back soon to find out about the second LP which the word on the street says will feature an appearance from big Pan Am fan – the legendary Iggy Pop.
(Out now on Def Presse)

Posted on 21st November 2018 no comments