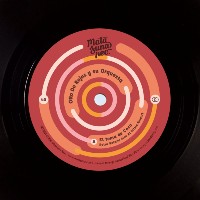 Still coming correct with the Latin 45 heat, Matasuna Records drop something of a follow-up to the label’s previous Otto De Rojas release of a few years ago with this brace of light-touch remixes of the Peruvian’s funky, Latin-disco nugget El Tema De Coco off 1976 LP Superéxitos Bailables. First up to twiddle the knobs is Retro Roland Riso going large on the drums with extra layers of percussion and a drum-funk outro that all the Latin b-boys and girls out there will go crazy for. Then it’s the turn of Soulbrigada who accentuates the track’s wah-wah guitar squelch quotient along with De Rojas’ piano playing but he doesn’t forget the b-boys and girls either by doubling the length of the original’s drum-break into a muy caliente middle eight.   Get on it quick – this won’t hang around.
(Out now on Matasuna Records)