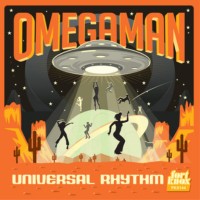 Oz producer Omegaman’s been around for a long time now, never disappointing and his new Universal Rhythm four-tracker might just be his most varied and ambitious release yet. Opening proceedings, for example, is blues-breaks number The Traveller featuring regular Omegaman vocalist collaborator Pat ‘Patou’ Powell holding forth over fat drums, throbbing bass, slide guitar and harmonica. Then there’s the Lily Lindsay-featuring Rose Coloured Glasses pitting moody vocals over a slower drum break in a Portishead stylee while closer All We have Now delivers a more upbeat Balearic breaks effort with a French language vocal from Léa Villani. That’s only three tracks of course and although the Emily Molloy-featuring The Sands Of Time isn’t the last track on the release, saving the best till last is a time-honoured tactic there’s no reason not to use here. A catchily atmospheric affair, this one finds the nexus of trip-hop and reggae and employs the sort of melody typically associated with the near East – appropriate enough given the title. Turns out this one also comes with the instrumentals too – what’s not to like?
(Out 9 December on Fort Knox Recordings)

One Response to OMEGAMAN: Universal Rhythm