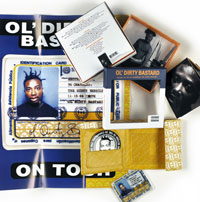 ODB’s magnum opus Return To The 36 Chambers gets a re-release on the self-proclaimed ‘world’s finest online music boutique’ label Get On Down Records in deluxe, collectable, free-gift ago-go format along the lines of this imprint’s previous Arthur Russell/ Dinosaur L drop. Where the latter was all about the limited edition screen prints, among the extras on offer here are a billfold wallet, for when you ‘got your money’, and authentic copy of Dirt McGirt’s very own food stamp card, for when you ain’t. And lots of extra remixes and acapellas (as you’ll see from the tracklist) of course. Just remember, if your pockets are deep enough to pay what I suspect this will cost (about £50 if the Dinosaur L release is anything to go by) it’s a double-edged sword – you’re going to want to fiddle with all the extra shit that comes with it but the minute you do, you’ll decimate its collectable value. Best buy two eh? Who said the digital era has lowered the price of music? Full press guff below player and vid…
(Out 22 November on Get On Down US)

It’s safe to say that hip-hop has never seen an album like Ol’ Dirty
Bastard’s 1995 solo debut Return to the 36 Chambers. The brief
glimpses of ODB’s unhinged genius provided by Wu-Tang Clan’s
landmark Enter the Wu-Tang album two years earlier were begging to
be expanded on to a larger canvas, and, with RZA guiding produc-
tion, the album promised to give Dirty the creative license to make
one of the most bizarre, entertaining and original LPs in hip-hop
history. With his raspy, drunken flow and dark sense of humor, Dirty
fearlessly attacks from all angles, throwing himself fearlessly into
punchy rhyme attacks (“Damage,” with GZA), drugged-out party jams
(the monster singles “Brooklyn Zoo” and “Shimmy Shimmy Ya”) and
bizarre, grimly hilarious fantasies of sex and violence (“Don’t U Know”
and the R&B-tinged “Sweet Sugar Pie”). Backed by RZA’s appropri-
ately gritty, dissonant beats and appearances from the Clan, Return
became an instant hit, selling over 1 million copies and earning a
Grammy Award nomination for Best Rap Album in 1996. The
album stands as a high water mark in the Wu-Tang Clan’s collective
creative output and was selected as one of the Best 100 Rap Albums
by The Source magazine in 1998. In honoring the legacy of one of
hip-hop’s most innovative releases, Get On Down is proud to
present this incredible and unique special edition of Ol’ Dirty
Bastard’s Return to the 36 Chambers: The Dirty Version on double CD
which contains the complete original album, remastered for optimal
sound quality, plus a 13-track second disc featuring remixes, a capellas, instrumentals and rarities from the Return to the 36 Chambers sessions.

The two-disc set comes packaged in a deluxe bill fold wallet, designed
especially for this release, which includes a reproduction of the
laminated food stamp card featured on the album’s iconic cover art.
Also included are a vintage “On Tour” poster, promotion sticker,
extended artwork and detailed liner notes.