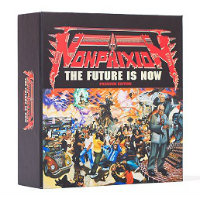 The Future Is Now! claimed underground NYC crew Non-Phixion in ’02 although, since they said it in ’02, I suppose that technically means the future was – er – back then. Fast forward to 2014 however and prestige re-issue label Get On Down have re-released Sabac, Ill Bill, Goretex and DJ Eclipse’s mighty debut in two premium editions! Which technically (and confusingly) means the past is – er – now. Honestly, you couldn’t make it up.

‘Making it up’ however might have been what people thought about some of the more extreme rhetoric on this lyrically paranoid and sleazy (see the Uncle Howie skit) effort – what with track titles like Black Helicopters and The CIA Is Trying To Kill Me. ‘Oh look at them tapping into millenial angst’ (you might have mused), ‘far-fetched but it makes a good narrative’. Then again, maybe they were right to be paranoid – after all the NSA has not so much been cybernetically going through everyone’s rubbish so much as sniffing everything in everyone’s underwear drawer. Production was never in doubt though and while it might have come from a range of names (including big ones like Necro, Large Professor, Pete Rock and DJ Premier) and might have ranged through the operatic (Futurama), rnb (Say Goodbye To Yesterday), Wu-style minimalism (Black Helicopters) and funkiness (Suicide Bomb) it was always heavyweight and never more so than on the Dave 1’s super-sinister Jackson 5-sampling Cult Leader or Premier’s massive Bar-Kays’-sampling beat for Rock Stars. Non Phixion: it’s all true.
(Out now on Get On Down)